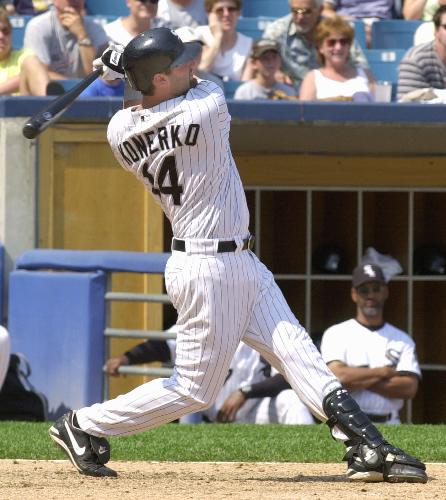 
 First the Boston Red Sox, then the Chicago White Sox

First the Red Sox, then the White Sox.  Who’s next?  The Cubs?  Well, maybe not this year.  As for the defending champion White Sox, what does 2006 hold in store for them?  It had been 88 years between championships for them before they won it all last year, will they have to wait that long again?  Or now that they’ve done it once, can they do it twice?

As we attempt to answer that question, we will take a closer look at the players that will make up the 2006 Chicago White Sox, the defending World Champions.

Criticized in for his handling of the pitching staff and preparation, A.J. was solid for in 2005, sporting a .999 fielding percentage for the second consecutive season and working well with the staff.  His career mark is .995, though he’s only thrown out 27% of all attempted base stealers.

A lightning rod for controversy (he seemed to be at the center of every post-season umpiring dispute), at the plate Pierzynski showed some increased power (18 HR were a career high) though his RBI total (56), average (.257) and on-base percentage (.308) were all career lows.

Konerko has quietly turned into one of the top hitters in the Major Leagues, posting back-to-back 40 home run seasons and establishing himself as the leader of this White Sox team.  He has been a consistent run producer as well, his aberrational 2003 season notwithstanding.  He has topped the 100 RBI mark in 3 of the past four seasons and has averaged 97 per year over the last six.

Defensively, he has become one of the best at his position as well.  His lifetime fielding percentage is .995 and he has been at .998, .995 and .996 in each of the last three seasons.  Moreover, his range factor has increased (his 9.92 was second among all 1B with at least 100 games) and last season he led all first basemen in double plays.

At 31 years old, it’s not unreasonable to assume that Iguchi can better those numbers with a year of Major League experience under his belt.  A .271 career hitter in , he came on strong his final two seasons there, hitting .340 and .333 with 27 and 24 HR respectively.

Uribe put on a fielding clinic in the World Series last year for , showing everyone why he is considered one of the top defensive short stops in Baseball.  His .977 fielding percentage was the third highest among SS with at least 100 games played and his 16 errors were the third fewest among starters at the position.

Joe Crede sparkled for the White Sox in the post season last year, hitting .289 and slugging .622 with 4 homers and 11 RBI while also playing spectacular defense to help spur to victory.

This comes after three years of failing to live up to the team’s and their fans’ expectations, at least at the plate.  On defense however, Crede has been good and has gotten better every year culminating last season with a .971 fielding percentage which tied him for third with Alex Rodriguez among 3B with at least 100 games played while his ten errors tied him with Bill Mueller of Boston for the fewest.

On offense though, it’s been a different matter as he has averaged just over 20 home runs and 69 RBI per year the last three years, while averaging just .255.  The Sox are hoping he can build on the confidence gained from last October’s success and finally reach his potential.

Aaron Rowand is the only position player who does not return in 2006, having been the centerpiece of the trade that brought Jim Thome to .  His spot in centerfield will be taken by rookie Brian Anderson who hit .301 with 30 home runs in just over 2 minor league seasons.  He made his big league debut last year, appearing in 13 games and going 6 for 34, but with two home runs and errorless defense.  Through March 27, had hit .316 and slugged .526 in camp, suggesting that he is indeed ready for the show.

The speedy Scott Podsednik returns in left for , where last season he hit .290 and stole 59 bases.  He provides the team with a spark at the top of the lineup and solid (though not spectacular) play in left.  Despite not hitting a home run in the regular season (after hitting 21 the previous two years with ) he hit clubbed two very memorable homers in October to help to the title.

Jermaine Dye was the MVP of the World Series and hit 31 home runs for the Sox while batting .274 and slugging .512.  Dye will hit fifth behind Thome and Konerko, and should see plenty of RBI situations.

Defensively, though, his numbers were off in ’05 (he was charged with 8 errors).  He is a former Gold Glove winner who possesses a cannon of an arm, making him one of the leagues top right fielders.

If there was one pressing need in the off-season for (aside from re-signing Konerko), it was to acquire a big left handed bat.  To that end, GM Ken Williams went out and got one of the biggest left handed bats around, Jim Thome.

Injuries and the emergence of Ryan Howard made Thome expendable in Philly, but his 430 career home runs will be a welcome addition on the South side of .  A native of , Thome averaged 47.5 home runs per year in the four seasons preceding last year, when injuries limited him to just 59 games, 7 home runs, and a .207 batting average.  For his career, Thome’s batting average is .281 while his on-base percentage is a gaudy .408.

While Thome will see most of his playing time as the teams DH, he of course can also play 1B and will likely serve as Konerko’s backup there as well.  He sports a nifty .994 lifetime fielding percentage as a first baseman.

New to the team is super sub Rob Mackowiak. In his five seasons in , Mackowiak saw extensive time not only at 2B and 3B, but all three OF positions as well. Despite not having a full time gig, he still averaged 148 games played the last two seasons.  Mackowiak’s best season came in 2004 when he hit 17 homers and drove home 75 in 155 games, all career bests.

If there were a 26th man for , it would have to be 1B/OF Ross Gload.  The 30 year old has had a sizzling spring for the club but with Thome to back up Konerko and Mackowiak and Ozuna able to play the OF, Gload is likely to begin the season in Charlotte, but is just as likely to be the first one to get the call in the event of an injury.

Starting pitching is by far the White Sox strong suit, and one that got a little bit better in the off-season.  Orlando “El Duque” Hernandez, listed as 37 in October, but rumored to be at or nearing 40, was dealt to Arizona for the much young Javier Vazquez (30 in July) while the rest of a star studded rotation returns intact.

Vazquez went only 11-15 with a 4.42 ERA for the Diamondbacks, but he struck out 192 while walking only 46 in 215.2 innings.  He pitched 3 complete games including one shutout and the Sox will slot him comfortably into their fifth spot, hoping that he can return to his 2001 form that saw him win 16 games with a 3.42 ERA and 3 shutouts.

As for the rest of the rotation, Jon Garland won 18 for the Sox with a 3.50 ERA and Mark Buhrlie won 16 and had a 3.12 mark.  Jose Contreras won 15 with a 3.61 ERA and Freddie Garcia won 14 and posted an ERA of 3.87.  These four, as you will remember, made history in the ALCS last season when they combined to throw four consecutive complete game victories over the Angels.

If there is an area of concern with the White Sox, it’s with the bullpen.  On the surface at least, this group looks solid; one of the best in the game in fact.  Look a little deeper and you find there is reason for concern and it starts at the top with closer Bobby Jenks.

The flame throwing right hander reported to camp overweight (no small feat when you’re listed at 280) and has struggled with his control, walking 8 batters in 8 innings while striking out only two.  Moreover, there have been whispers that his velocity (clocked as high as 101 mph last year) has been down.

Dustin Hermanson, the closer last year before back problems put him on the shelf for much of the final two months of the season, has been suffering from a recurrence of that back pain.  He has had several epidurals this spring and missed two weeks of games.

The Sox have also struggled to find a reliable left handed reliever beyond Neal Cotts, who remains one of the best in the game.  They plan to carry three lefties.  Matt Thorton, who was acquired from near the end of camp but has been hit hard all spring, will fill one of those spots and Boone Logan, a 21 year old non-roster invitee who has never pitched above Advanced Rookie League, will fill the other.

The hard throwing Cliff Polite returns as the top right handed set up man and Brandon McCarthy, who made 10 starts last season for the Sox, rounds out the bullpen.

The defending World Champions have returned all but one positional starter and improved an already potent starting rotation.  Jim Thome is a tremendous upgrade over Carl Everett, and they have perhaps the deepest bench in all of Baseball.  The bullpen is a concern, but will likely be fine in the long run as GM Ken Williams is never afraid to tinker and adjust midseason.  In other words, they are primed to make another run at a World Championship.

2006 Team Previews
See where we think the teams will finish, and what we have to say about them

Hall of Fame
See who's in, who's out, and where we differ from Cooperstown

The Teams Page
Find about all about your favorite team including Stats Leaders, Awards, Playoff Teams, and More.

Statistics
Your source for stats, both conventional and otherwise.

Top 100s
See where we rank'em, and how our lists compare to Bill James, Total Baseball, and others.
Trivia
Test your baseball knowledge with our obscure knowledge quizzes!

Predictions
As the season rolls along, check to see how accurate our 2005 predictions were.

Boneheads
See who's making a lot of money to embarrass themselves writing about baseball.

Heated Debates
We don't always agree with each other. In fact, we often don't!

Scorer's Corner
Join Keith in his Scorer's Corner as he shares scoring oddities that he has encountered while scoring Zephyr games.

Friends
Yes, we have them. Check out these other fantastic sites.